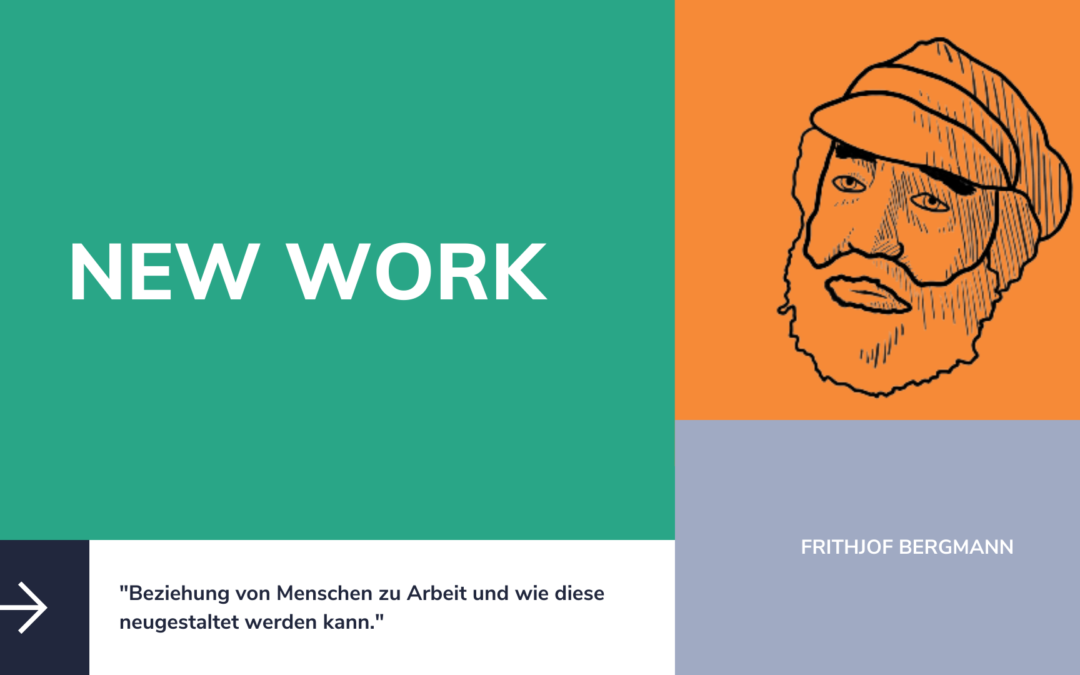 Everyone is quick to call themselves a New Work supporter, but very few have any concrete idea of what the term actually means or where the term originally comes from In my opinion, that is not right. That is why I would like to give a brief insight into the origins of New Work by Frithjof Bergmann. Away from digitalisation measures or the democratisation of companies.

New Work was first introduced by social philosopher Frithjof Bergmann over 30 years ago. Bergmann, who fled Austria to the USA because of National Socialism, is seen as a pioneer in the field of presenting alternatives in the field of wage labour in capitalist-oriented economies. According to Bergmann, New Work is concerned with the relationship between people and work and how this can be reshaped.

Also, gainful employment should be replaced by an occupational model that is divided into two different phases or parts. In one phase, wage labour is to be pursued, which is primarily intended to secure the financial existence of an individual. Frithjof Bergmann describes that this phase should last half, six months, of a working year. In the second phase of the year, people should do work that they really want to do. According to Bergmann’s philosophy, work should be meaningful.

In another idea, Bergmann deals with people’s self-determination and competence development. The so-called high-tech self-production describes that people should live more independently and produce a large part of the objects that are needed in daily life themselves. These own productions are to be supported by machines. For example, robots can help people produce those in-house productions. Here it seems that Bergmann affirms a self-sufficient lifestyle, but this is not the case. According to the social philosopher, people should find out which activity gives them personal meaning and which does not by making their own products. In this context, the self-determined choice of which activity one would like to pursue as a person plays an important role.

“New Work helps people find the work you really (really) want to do in life.”

Frithjof Bergmann not only deals with new divisions of working time, but also writes philosophical ideas with reference to work in general. According to Bergmann, New Work is a way to support working people in finding the work that one really (truly) wants to do in life. In the process, work in its basic form is to be reconsidered. New Work is a continuous process of self-reflection and cannot be compared to a one-off action. According to this, people in every phase of life should deal with the question of what someone really wants to do for a living.

New work according to Bergmann, is part of a new economic system, the so-called “New Economy”. Products and goods such as food or clothing are sourced locally. People have to deal with creativity and innovation in the course of work in order to find joy in life and not lose it.

“New Work according to Frithjof Bergmann is thus a far-reaching and holistic approach that focuses on resource-oriented and meaningful life and work in a digital and technological environment that generates new products and thus enables livelihoods” (Schnell and Schnell 2019, 9).

In Frithjof Bergmann’s work, New Work New Culture, he appeals to further develop the system of capitalism. Even if with this call he addresses parts of society that can be assigned to the left political and social spectrum, it was not those who followed his call. In the end, it was companies and managers. A 2017 study of 112 companies by Fabian Kienbaum showed that 74% of German companies have the topic of New Work on their agenda. Accordingly, those companies indicated that they had either already implemented New Work or were planning to do so.

But not everything that calls itself New Work is also New Work according to Bergmann. The term New Work is understood as a collective term in most companies. New work is nowadays associated with various development measures in many organisations. Themes such as decentralisation, democratisation and digitalisation are the most common measures. Whoever talks about New Work today does not usually mean Bergmann’s revolutionary philosophical approach. The term New Work is often used to describe new ways of working or changes in organisations.

To learn more about the topic, go to our other post on New Work: https://skilltree.at/was-ist-new-work/

Competence Management
Frithjof Bergmann
Human Ressources
New Work
New work culture
skill management
Skill Management Software
Trends
We use cookies on our website to give you the most relevant experience by remembering your preferences and repeat visits. By clicking “Accept All”, you consent to the use of ALL the cookies. However, you may visit "Cookie Settings" to provide a controlled consent.
Datenschutzerklärung | Impressum

This website uses cookies to improve your experience while you navigate through the website. Out of these, the cookies that are categorized as necessary are stored on your browser as they are essential for the working of basic functionalities of the website. We also use third-party cookies that help us analyze and understand how you use this website. These cookies will be stored in your browser only with your consent. You also have the option to opt-out of these cookies. But opting out of some of these cookies may affect your browsing experience.
SAVE & ACCEPT

Why have an Excel matrix when you can have a whole tree?
Try Skilltree for free and start growing your skills.